Where does the time go?! I mean, seriously, I feel like it was just a couple of weeks ago that I was putting together my training plan for the Newport Marathon and here I am, only about 4 weeks away from the big day. Is this another one of those signs that I’m getting old? The sensation of time going by so quickly, I mean. It must be.   It’s right up there with my new, annoying need to use the zoom function on my computer screen when I’m reading text these days. (Does anyone else feel like 12-point isn’t what it used to be?!)

Enough with the questions and the lamenting about the passage of time, I have a race to tell you all about. Held on the Saturday before Easter, the Hop Hop Half Marathon served as sort of a trial run for me.   Six weeks out from Newport I wanted to test my fitness level, and even more importantly, my pacing. I struggle with pacing myself evenly and I know that this is going to be a key element in my marathon success.

I’m going to put it right out there and acknowledge that this was a tough race for me. I did not taper, as I was considering this just part of my training plan, and I definitely felt fatigue in my legs and body when pushing my speed. I also got caught up in a bit of self-doubt about my clothing choices at the last minute, which resulted in me hastily adding an extra layer on top, which I almost immediately regretted after the run got going. I overheated and struggled with the ramifications of that for the majority of the race.

Despite all of that, I only finished 31 seconds short of my half-marathon PR AND I did a relatively consistent job (with the exception of one tough mile) of pacing myself evenly, while staying in tune with my level of effort and my actual pace time. There’s also something to be said about the level of mental focus that I had to hone in on, given the challenges I was having. 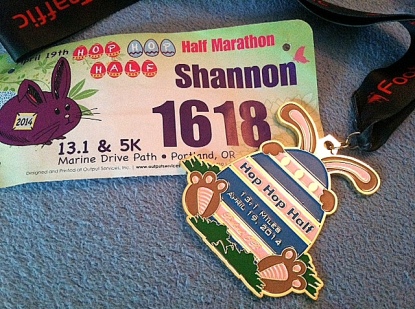 The course was the same as last year, which is to say, it was absolutely enjoyable and peaceful. The route took us along the Columbia River, with what was a clear, impressive, and positively imposing view of Mt. Hood for more than half the route, until we made the turn around. The staff and volunteers from Foot Traffic were great and the logistics of the run all seemed to go off without a hitch. I also was super lucky to cross the finish line when I did. About 10 minutes later, as I was in my car and headed home, the sky absolutely opened up and those still out there were treated to some serious rainfall!

It was a tough race for me – a really tough one, actually. But it served its purpose. Looking at it from the perspective of it being one part of a larger plan and goal, I’ll even go as far as to say it was successful in some ways, too. I feel good having that trial run under my belt – and I hopefully learned a lesson about making last minute wardrobe decisions based on pre-race anxiety!